The grizzly bear tours from the lodge after August 24th as permitted up the Glendale River to watch the grizzlies catch and eat the spawning salmon. In this case the two year old cubs wants a share of mother’s salmon but mother thinks that at this age it should be catching it’s own food. Grizzly cubs have been known to stay with their mother three or four years if she does not become pregnant but they could also be denning on their own after the second summer. 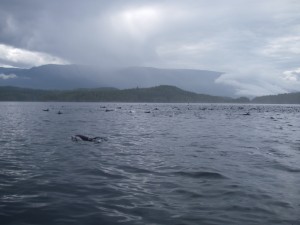 Whether on a whale watching safari to Johnstone Strait, grizzly bear trip up Knight Inlet or on the way to Trapper Rick’s on the Kakweikan River there is a chance to play with dolphins.  Dolphins are spending their summers in our viewing area and at time in pods of several hundreds. They tend to be very active and to not shy away from boats in fact if you want to be left alone it is necessary to stop the boat and wait until they pass on to another area.