Today’s posting is the opposite of yesterdays.  We were still going up the river but these grizzly bears were coming down river. It was a high tide and we were about as far up the river as we were able to go in the skiff. We were hugging one side of the river when the mother and cub came around the corner and passed on the other bank about fifteen meters (yards) away. Over a period of several weeks last summer we viewed mother grizzlies and their cubs on a daily basis as we all moved up and down the river with the tide. 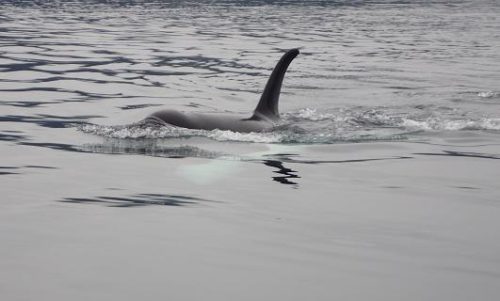 A killer whale / orca’s working speed is much faster than a humpback as it is looking for salmon. This orca had been circling the area of our boat as we sat and watched it feed. This time if surfaced under a “full head of steam” before it dove again nearer the boat to continue it’s search for food. Again as in January 17th post my guests did not complain.