Grizzly Bears all seem to have their own fishing style.  Often the larger, more mature bears are far more patient opting to let the calories come to them rather then run around burning calories in hopes of maybe catching a salmon.  This bear sat for two hours picking off the occasional pink salmon as it swam by.  Initially just due to the bears size we assumed it was a male.  After a “better look”, however we discovered that this is in fact a very healthy female Grizzly. 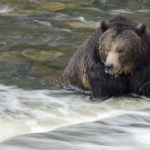 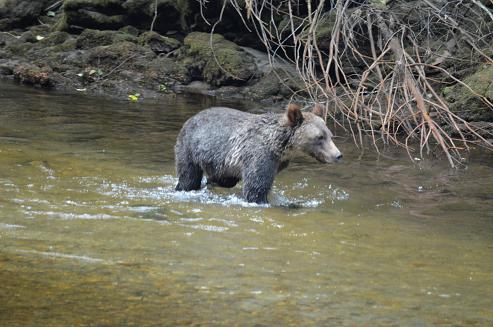 This sub-adult (four or five year old) grizzly is walking down-river but if you look closely at the water pushing against its legs the water is flowing up-river. The lower part of Knight Inlet’s Glendale River is a tidal river and at certain tides it provides our flat-bottom boats enough water that we can quietly move up the river to watch the grizzlies. This river is not more than 25 meters (yards) at its widest, which means when we meet a grizzly you are able to get good photos. The bears have become accustomed to meeting small boats on the river and if you are concerned about your safety just remember that as your guide I have a family and will not be taking ANY risk that jeopardize your or my life.