Grizzly Bear lodge’s grizzly tours from May to mid-August are in Knight Inlet’s Glendale River estuary. The bears come to this area to graze on the sedge grass and to turn over rocks at low tide for protein.  However the large males which also appear have something else on their mind. Mating season runs from May to early July. Cubs are usually born between January and March. The female usually has two cubs. The cubs are blind and weigh approximately 500 grams (one pound) at birth. The cubs will grow to weigh 3-4 kg (7 to 8 lbs.) prior to emerging from the den in spring. The bear in this photo was in the area for several days until he approached the female in tomorrows posting.

More Than Wildlife 2 of 3 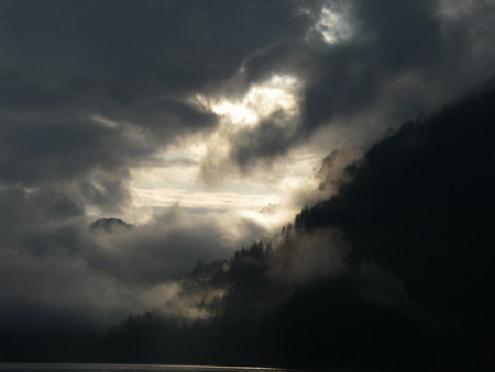 Unlike yesterdays post with the fog this has a much more dangerous look. It was a morning run up Knight Inlet to watch grizzly bears and as we turned Littleton Point to enter Knight’s we got quite a surprise. The water was calm without a breath of wind and in about fifteen minutes the sun broke through the clouds and the day turned out to be perfect but that fifteen minutes was a little unnerving.