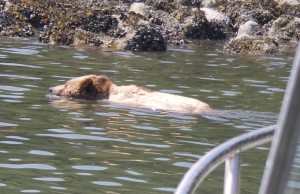 Grizzly bear’s mating time is late May through June in the Glendale River area of Knight Inlet. It is also the same time that the mother grizzlies are bringing their new cubs to the estuary area for the first time.  This is potential a dangerous mix as males have been known to kill cubs as it is believed that the females will come into season. The courtship we watched unfold seemed to involve an uninterested female who was trying to avoid the male. The male was following her along the beach until she took to the water and eventually swam past the bow of our boat.  The male was undeterred and wadded along the shore to keep pace with the female. This continued up the delta grassland of the estuary until they disappeared in to the surrounding forest. 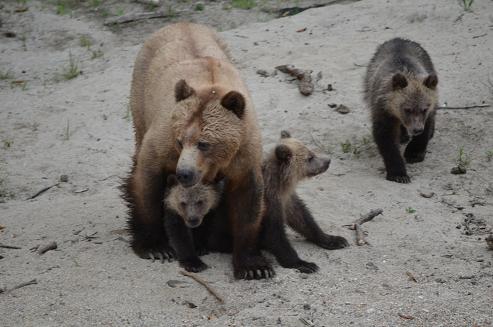 The grizzly bear population in the Knight Inlet area is healthy and growing. Grizzlies are frequently having triplets and this year there was a mother with four cubs. It is not unusually for one of the three cubs not to survive into its second year but for the past several years that has not been the norm. The number of grizzly bears in the area has increased so that the juvenile bears are moving down Knight Inlet and are becoming more common close to the Lodge. In the spring mothers with cubs are starting to appear in areas adjacent (ten minute boat ride) to Minstrel Island the location of the Grizzly Bear Lodge. This summer (2014) we had a large sub-adult grizzly on the island that took a week to scare off the island. Grizzlies are nice to visit on a tour but when the bear is in the front or back yard and guests are watching bears from the lodge deck that is taking grizzly watching to a new level. This mother and triplets are in the best location and are being viewed from the platform on the Glendale River, which flows into Knight Inlet.