These grizzly bear siblings seem to be old enough to fish on their own but they appear to be waiting for something to happen. It could be the lack of salmon in the river or that other larger dominant bears have moved then to the sidelines. It could be perspective on my part in that when you do not have another bear use for size comparison maybe they are just very fat two year olds waiting for mother to provide another meal.  However at two they should be fishing because next year they would normally be on their own. At times the cubs stay with mother more than two years and if she is not pregnant cubs may stay with their mother for four years. 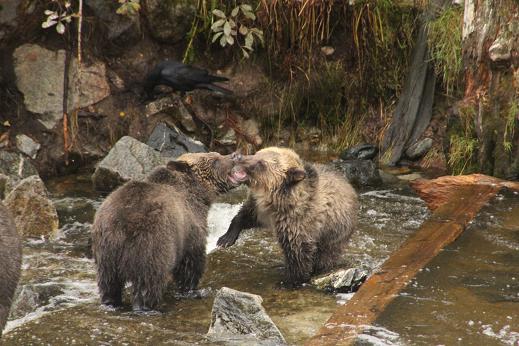 It starts mostly out of boredem as the cubs wait for their mother to catch a salmon. Notice the crow in the background picking up pieces of salmon. That is where the mother grizzly shares the samon with her cubs. Also notice in the lower lefthand cornes of the photo mother’s backside.