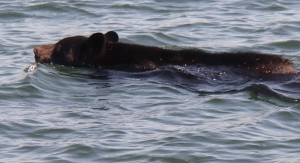 Grizzly Bear Lodge is on Minstrel Island BC and on the southern edge of the Broughton Archipelago. This is an area of many islands varying in size from small (100 square meters / yards) to large (100 square km /miles) and therefore many passages that need to be swum when black bears want to move from island to island. The current estimate of the black bear population in British Columbia is 120,000–160,000. This is about one quarter of all black bears in Canada. Its natural range includes Vancouver Island and most coastal islands to the north. This means that a swimming black bear is common rather than rare. This appears to be a healthy bear with a good layer of fat as shown by how high it’s body is out of the water. In the early spring often all that is visible is their head.

Sometimes the Wildlife Comes to Us 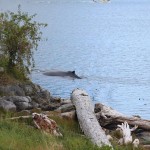 This is a picture of a Humpback Whale.  We see Humpbacks quite often, so that in itself is not unusual.  What is unique about this picture is that it is taken from the front deck at the lodge cruising by only a few meters from the beach.  Sometimes it pays to stay put.