On the boat rides up and down Knight Inlet for the grizzly bear watching day the guides are constantly scanning the shores for black bears. This photo is of one of the few brown black bears observed in the inlet over the years.
Ministry of Environment, Lands and Parks for British Columbia says:
“Black bears are not always black, and this variation is most apparent in British Columbia. Other colour phases that occur in British Columbia include cinnamon, brown, and blonde. A white-coloured morph, called Kermode or Spirit Bear, is reported most frequently on the north-central coast. The blue phase, or “glacier” bear, is sometimes seen in the extreme northwest corner of the province.” Unfortunately this “brown” black bear is rarely seen in our viewing area. 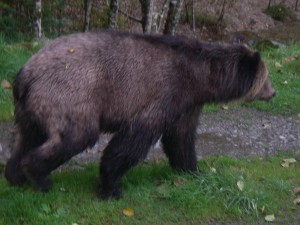 Another day another grizzly bear close to the viewing stands.  No I am not trying to pass yesterdays post off as a different bear this one has a leaf on it’s back.  Actually if you look at the shoulder you will notice this bear does not have the light patches on the fur on it’s neck or behind the shoulder.  Coat colours and a variety of colour patches on their body identify the bears in our viewing area.  Unlike bears in other areas in BC or Alaska our bears are nearly scar free.  There is sufficient food that they do not fight enough to hurt or leave scars rather they just get aggressive enough to move bears to another part of the river.