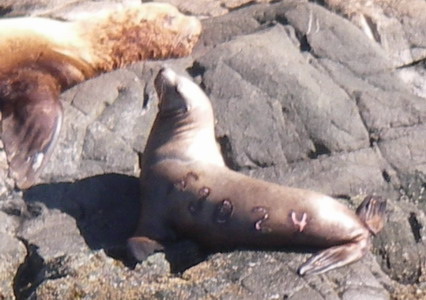 This Steller sea lion was branded at Forrester Island in Southeast Alaska that is the “F” in the brand. Branding occurs at several places along the west coast of North America as part of project to discover the reasons behind the mysterious disappearance of sea lions and what it could mean for the ocean ecosystem. Since 1980, the world population of Steller sea lions (Eumetopias jubatus) has dropped from around 300,000 animals to fewer than 100,000, and it is still declining. Possible causes include increased incidence of parasites and disease, predation by killer whales, nutritional stress through competition with man or other species for food, or nutritional stress caused by natural and/ or human-induced changes in the abundance, quality and distribution of prey. Other factors that may be contributing to the population decline include meteorological changes (i.e., frequency of storms), pollution and toxic substances, entanglement in marine debris, and incidental and intentional take by man. Whether the decline is caused by a single factor or a combination of all of the above is a matter of scientific debate.

Black Bears are often seen in our area and are excellent climbers.  Unlike the Grizzly Bears they have short, sharp claws and can easily climb tress and move over harsh steep terrain.  This bear was spotted on the way up Knight Inlet on a steep rock face overlooking the water. 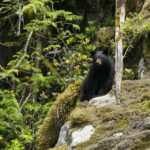