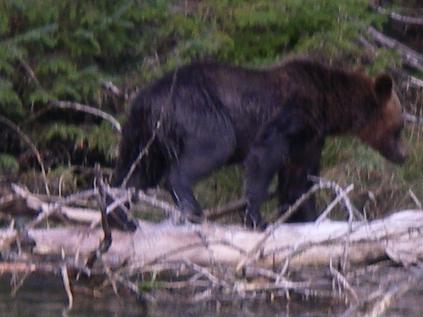 The grizzly bear population of Knight Inlet is healthy and growing. Over the past five years the number of sightings in the lower portion of the inlet near our lodge has increased. This past summer a grizzly visited our island for about a week before it moved on down the inlet. This photo was taken coming back from a whale watching day when we found a grizzly swimming between islands. It was working its way to Johnstone Strait, which separated the mainland from Vancouver Island that now has a small population of grizzlies. Historically there have never been grizzly bears on the Island but that changed six years ago when the first bear appeared near Kelsey Bay and more have arrived every year. 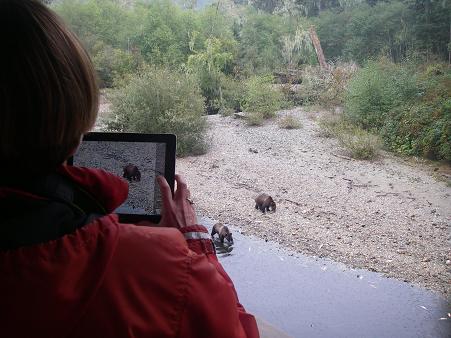 As a guide I am always looking for different photos for the blog and this is one of them. A photo of a guest taking a photo of grizzly bears from the viewing stands. The lodge uses the stands on Knight Inlet’s Glendale River in the fall after August 24th. The grizzly bears come to the river because of the abundance of salmon that come to spawn in the  man made spawning channel. The bears often walk down the natural river by the stands and then move into a large pool where the salmon wait before moving into the spawning area. NO the bears are not that far away it just seems that because of my camera but who will really care after viewing tomorrow’s post.