A wild orca often travels far, and quickly, in deep water. The water provides pressure to the fin, keeping the tissues inside healthy and straight, and encouraging the dorsal fin to remain straight. However, it is not impossible for a wild orca’s dorsal fin to collapse or become bent. A study in 1998 of killer whales in New Zealand showed a relatively high rate (23%) of collapsing, collapsed, or even bent or wavy dorsal fins, and noted that this was higher than that observed in populations in British Columbia or Norway. It has been found from a well-studied group of wild killer whales (the ones in our viewing area) off the coast of British Columbia that the total rate of dorsal fin collapse is around 1%.  This is only the second collapsed fin I have seen in ten years.  Researchers have theorized that dorsal fin collapse in wild whales may be due to age, stress or altercations with other killer whales. 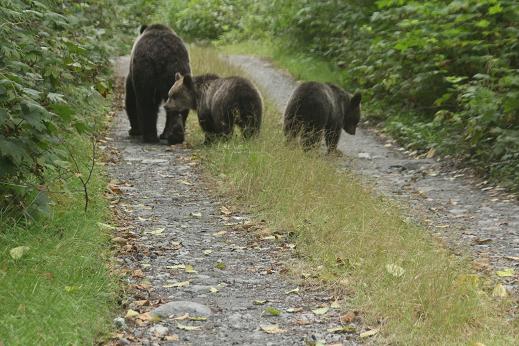 The decision was that we were not a problem and the road was theirs to use. We waited and moved very slowly down the road and followed them for more than ten minutes until they found a break in the thick brush along the road. As they slowly moved off the road we were free to continue to the river and Rick’s cabin and to look for grizzlies feeding at the falls while salmon leaping the falls and moving up river.