“When spyhopping, the whale rises and holds position partially out of the water, often exposing its entire rostrum and head, and is visually akin to a human treading water. Spyhopping is controlled and slow, and can last for minutes at a time if the whale is sufficiently inquisitive about whatever (or whomever) it is viewing.

Spyhopping often occurs during a “mugging” situation, where the focus of a whale’s attention is on a boat rather than on other nearby whales. Spyhopping among orcas may be to view prey species. For this a spyhop may be more useful than a breach, because the view is held steady for a longer period of time.” From Wikipedia 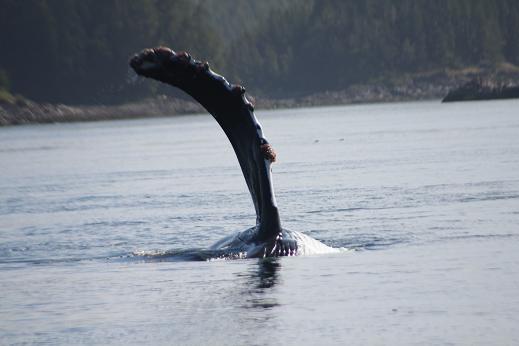 This is a humpback whale on its side waving a pectoral fin. This flipper is very long (five meters/yards), between 1/4 and 1/3 the length of its body, and has large knobs on the leading edge. From a distance it can be confused with an orca dorsal fin, which is tomorrow’s post.