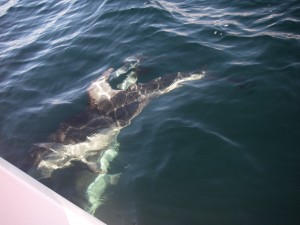 Grizzly Bear watching on the Glendale River – 2 of 7

When we go to shore to drive up the river we land on a finger of land that was an approach to a dock once used by a logging camp. The first photo is the view looking out of the Glendale River estuary and up Knight Inlet. The River is about half way up Knight Inlet which means the Inlet extends for another 72 kilometers (45 miles) to the head. The second photo is looking into the mouth of the River as you can see the stern of the skiff from yesterdays posting. This photo was taken at high tide as the tops pilings you can see may be 5 meters (15 ft.) out of the water at a low tide.