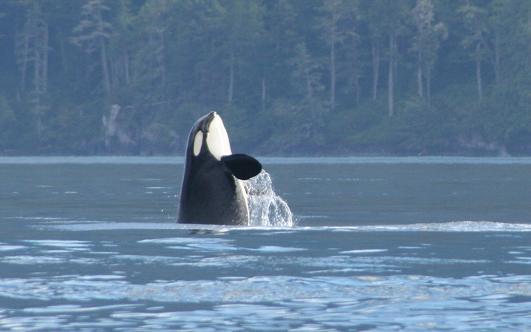 When spyhopping, killer whale rises and holds position partially out of the water, exposing its head, this is visually akin to a human treading water. Spyhopping is controlled and slow, and can last for minutes at a time if the orca is sufficiently inquisitive about whatever (or whomever) it is viewing. Spyhopping often occurs during a “mugging” situation, where the focus of attention is on a boat rather than on other nearby whales. Generally, the killer whale does not appear to swim to maintain its “elevated” position while spyhopping, instead relying on exceptional buoyancy control and positioning with pectoral fins.

Two for one Eagle Picture 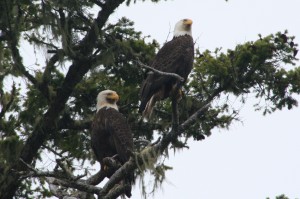 Bald Eagles mate for life, as do most birds. However, if one dies or is lost, the one remaining will take a new mate. Although male and female eagles have the same coloring there is a difference in size. Females are about 1/3 larger than males. Another way to tell them apart is to measure the height of their bill. The female’s bill is always deeper than the male’s and usually has a larger hook than the males. All this being said it is still hard to tell which of these two is the male or female. It is definitely a mating pair because no two eagles would get this close to each other if they were not a mating pair.