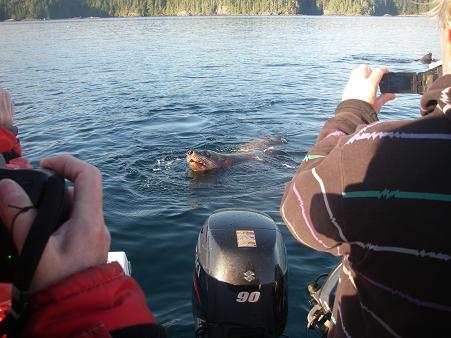 Steller sea lions range throughout the Pacific Rim (from northern California to Northern Honshu in Japan, and to the Bering Strait). About 70 percent of the Steller sea lion population reside in Alaska. They do not migrate like some pinnipeds, but they do move seasonally to different feeding and resting areas. Late May and early June as well as September and October seem to be the time of the year when there are more sea lions in our area. However over the past several years more have remained in the area all year.  In the water they do not seem that large but they are curious and often visit us as we watch them on shore (see tomorrows posting).

A flock of seagull – who cares? Most guest do not care until they are whale watching and the guide explains the importance and then many pictures are taken. The importance is the herring and the diving ducks feeding on herring. The herring get into “balls” which revolve inside out as a means of defense and the ball is forced to the surface by the ducks and this attracts the seagull which in turn attracts your guide and more important the humpback whales. The result is shown on the March 3, 2014 posting showing a whale lunge feeding. As a guide I locate the herring balls with the help of the seagulls and then park the boat within a reasonable distance from the herring ball and wait. Thank you James O’Donoghue for another interesting photo.