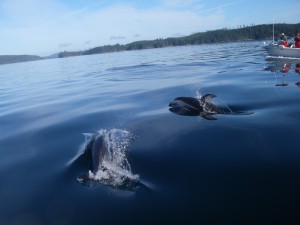 Pacific white-sided dolphins are only one of the many mammals often viewed on the whale watching day.  Dolphins tend to travel in pods of several hundred the largest pod I have come across was between fifteen hundred and two thousand.  This was in the late fall and they appeared to be heading out of the area.  The pods we encounter in the summer are playful and come to our boats out of curiosity.  In this case we were stationary as the dolphins were following another of our boats.  At other times they will pass beneath our bow while we move along side a large pod. 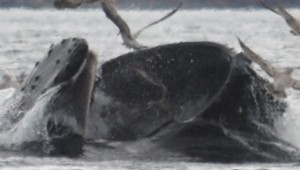 As mentioned earlier this has been an excellent year for humpback whale viewing at Grizzly Bear Lodge.  Some interesting pictures were taken of the whale’s lunge feeding on the many herring balls at Bold Head near Johnstone Strait. The herring balls are a result of the many duck feeding and the herring’s defense is to form a revolving ball, which attract the seagulls and the whales. A whale will come up beneath the herring ball with its mouth open and catch as many herring as possible and in this case a seagull.  Check the cropped picture.