France, showing a humpback whale fluking, which is when the whale raises its tail out of the water and descends beneath the surface. The under side of the tail is used to identify different whales by it’s shape, bumps on leading and trailing edge, the black and white pigment pattern and any scars. There are many websites dedicated to humpback whale identification and some that provide the Photographic Catalogue of Humpback Whales in British Columbia.
Humpbacks show great fidelity to their feeding areas and British Columbia is split into two separate regions. The southeast Alaska/northern British Columbia region is estimated to have a population of 3,000-5,000 whales, while the southern BC/Washington population is approximately 200-400 whales. There also appears to be a correlation between feeding and breeding grounds. The majority of humpback whales feeding in northern BC appear to be wintering in Hawaii. The southern BC whales have animals that have been re-sighted off mainland Mexico, as well as Hawaii. 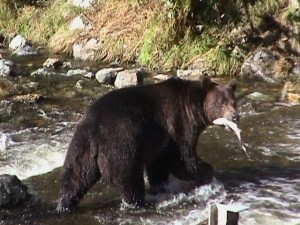 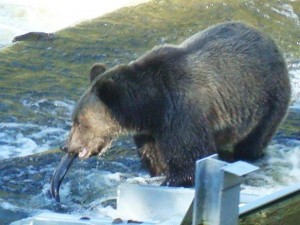 Knight Inlet runs approximately 100 kilometers into the BC mainland and is located off the East Coast of Vancouver Island about 100 kilometers north of Campbell River. There are seven rivers running into Knight Inlet but only the Glendale River has a “man made” spawning channel which means many more salmon than some of the other rivers and therefore grizzly bears come from the surrounding area to feed on the Glendale at the base of the viewing stands we use. Even though there are lots of salmon the first step is to catch the salmon. These grizzly bears seem to have that part of their job completed. Photos byBruce & Carole Cripps 5-11