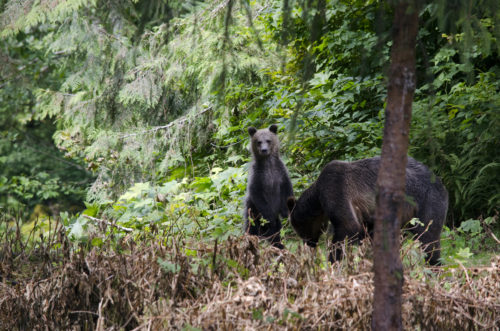 Well, the lodge is all put away for the winter and the cold weather has arrived.  Temperatures at the moment are below zero, with some chilly winds in the Inlet.  After a very dry fall our rains did finally arrive, which helped the fish spawning in the river systems.  It was a good run of salmon this season and we are confident that the majority of the bears were able to put on the necessary weight for hibernation. 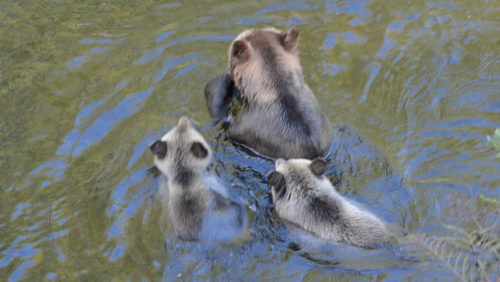 There are still a few Humpbacks around.  Although they are migrating to their breeding and calving waters it is not done all at the same time.  Although less abundant during the winter months Humpbacks can be spotted in our waters 12 months of the year.  The Biggs (marine mammal feeding) Orca are making their rounds and there are still good numbers of Sea Lions and Sea Otters in the strait.  I try to get out on the water during the winter months, although with the unpredictable weather it is much less frequent. 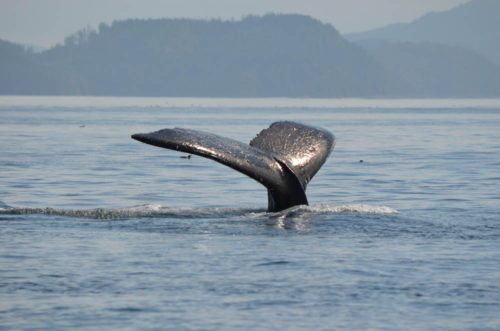 Molly is back at University in Victoria and Melinda is working at a ski resort in the interior of British Columbia.  Felix is off to Kenya to continue his photography.  We look forward to having them back next season.  I live in Port Hardy and make it up to the lodge when I can.  As the weather improves in the spring it will be time to head back up and get prepped for next season.  Thanks to everyone for making this post covid season a great one.

2022 was a wonderful season, after being more or less shut down by covid.  It was wonderful to welcome guests and staff back to the lodge and enjoy some great wildlife sightings.

Bear viewing was great right from the start of our season in late May until the end in mid October.  In the spring we were able to view the bears feeding on sedge grass in the estuary and various marine creatures such as shore crab, mussels and barnacles.  Our steady viewing continued, but the real treat was starting to see good numbers of salmon entering the river systems by late July.  After a few years of mediocre runs this was great news.  We took guests to the viewing platforms starting on August 25th and had some great sightings of bears actively feeding on salmon.  During mid September we had some very dry weather.  This led to many of the fish holding in the deeper pools and although our sightings remained good they did become a bit more sporadic.  Thankfully we received some rain later in the month and had some great viewing into early October.  We are hopeful with some well fed bears this season we should be seeing more cubs emerging next spring..

On the Kakweiken River trip we had some great Grizzly Bear viewing, particularly from late July through August.  The salmon were early here as well and so were the bears.  Pink numbers were decent and we also saw good number of Coho Salmon.  There was some phenomenal viewing at the falls with “Moira” staging in the chute area.  Later on in the season we saw a lot of “Andy” and a few other bears that we are not familiar with.  After a couple years of not being out consistently it was very rewarding to see some bears that we haven’t come across in a couple of years.  The bears in this system looked to be in excellent condition by the season end, which is great news moving forward.

It was also a great year for marine mammals in both Knight Inlet and Johnstone Strait. The resident (fish eating) Orca showed up in mid July and were around until late September feasting on salmon.  The transient (mammal feeding orca) were around quite a bit this year and we were lucky to see them hunting both harbour seals and white sided dolphins on several occasions . The Humpback Whales were amazing once again and were very abundant throughout the entire season.  As usual there were large numbers of humpbacks in Johnstone Strait and Blackfish Sound.  On several occasions we had Humpbacks right in front of the lodge, as well as Humpbacks in the Inlet, particularly in late September.   In addition White Sided Dolphins, Stellar Sea Lions and Porpoise were common sightings.  Big news this year were the rafts of Sea Otters we viewed near Queen Charlotte Strait.  In the past Sea Otters have been an occasional sighting, but as their numbers improve it seems like we are starting to have more “resident otters” in the area.  This is great news as they are a key species in preserving kelp forests.  For the avid birders there was plenty to view as well. Bald Eagle, Belted Kingfisher, Marbled Murrelets, Rhinoceros Auklets, Pigeon Guillemots, Storm Petrels, Surf Scoters, and Osprey to name a few. 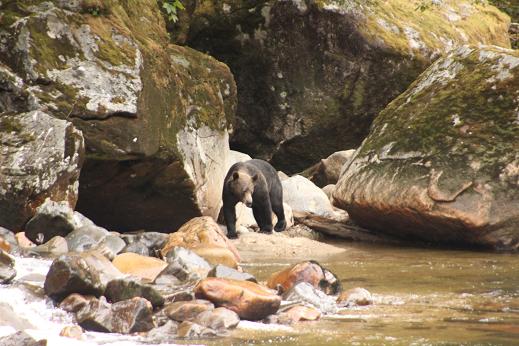 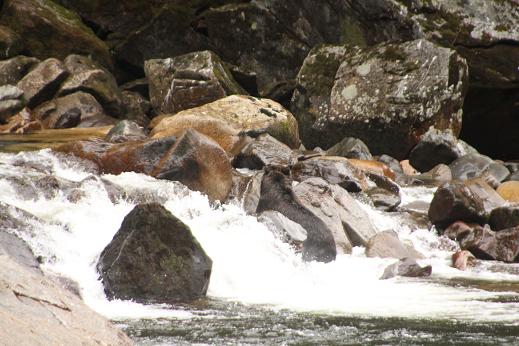 Yesterday’s, today’s and tomorrow’s post photos are taken with a Pentax Optio Wpi 6MP and 3X Optical Zoom which does not have a “good zoom” lens for wildlife photo’s so with most cameras you would have much better photos. It is the feeling you get when watching grizzlies that are across the river from where you are sitting that is the adrenaline rush. You are not in a boat or a viewing stand but sitting on a rock bank across a river from the grizzlies. Trapper Rick knows these bears and they respond to his voice but he is still carries a gun to ensure your safety. The grizzly bear in the water is fishing for salmon and does manage to catch one…