The extra day at Grizzly Bear Lodge is spent on the Kakweikan River with Trapper Rick. The first picture shows Trapper with two guests who appear to be taking pictures of the falls. Twenty minutes earlier there were grizzly bears where they are now standing and they were the subjects of the photos. Now they are trying to capture a photo of the salmon leaping over the falls. With the large lens they are using such a photo takes time and a certain amount of luck but most guests manage a reasonable shot. To the left of Rick is the entrance to the salmon ladder that bypasses the falls. If you walk back up the ladder about thirty meters (yards) one is able to see the fish in the ladder as in the second photo. Not as dramatic as jumping but guaranteed. 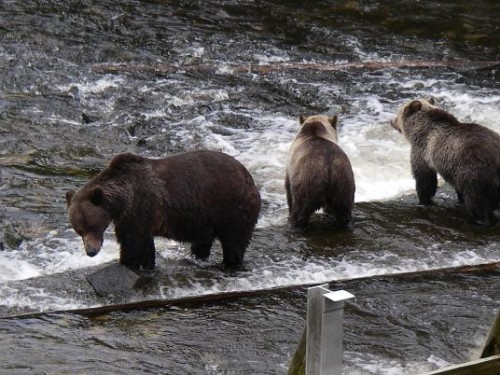 This is the wait and they will come technique. After August 24th the grizzly bear watching is from a platform up the Glendale River. At this location the grizzlies pick off the salmon as the approach the weir into the spawning channel. These bears spent most of the morning waiting for the salmon to move up river rather than moving down to the salmon. See tomorrow….