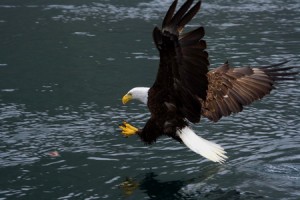 “Once an eagle spots a fish swimming or floating near the water surface, it approaches its prey in a shallow glide and then snatches the fish out of the water with a quick swipe of its talons. Eagles can open and close their talons at will; although, a hungry eagle can be dragged into the water when refusing to release a heavy fish. Unfortunately, the eagle might drown during the encounter with the fish; eagles are strong swimmers, but if the water is very cold, it may be overcome by hypothermia. If an eagle falls into the water during an aerial fight over food with another eagle or accidentally falls into the water, they are able to take flight from the water surface. Because of the energy expended during hunting, an eagle has to spend a lot of time resting quietly. It’s estimated that only one out of eighteen attempts at attacking its prey is successful. Note: a bald eagle’s lifting power is about 4 pounds.” American Bald Eagle Information at baldeagleinfo.comThis photo was provided by Glen one of the lodge’s guides and was taken near the lodge on Minstrel Island BC. 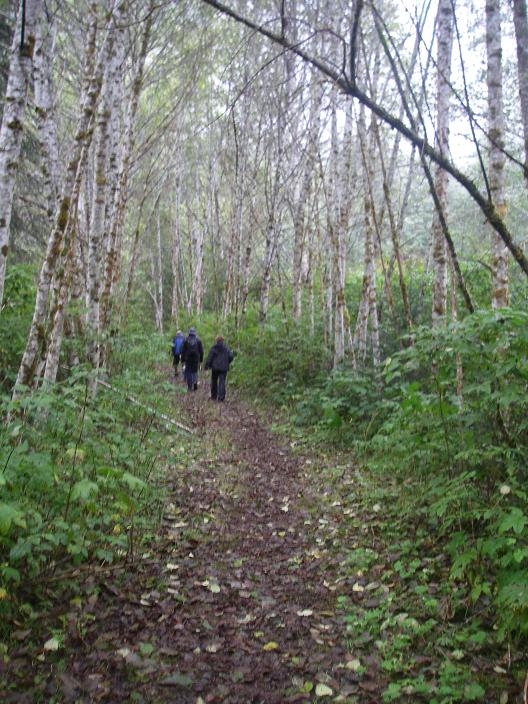 The extra day at the lodge normally means a trip to the Kakweikan River and a day with Trapper Rick.  This river is located on the BC mainland and we travel by road to Rick’s cabin. The day includes a short hike to Rick’s cabin once we have crossed the river. The walk, which follows the river, is the only time you are not aware to the mountains that surround the “wild” valley that Rick inhabits.