This is a rare site a grizzly with four cubs and you will need to look hard to find the fourth cub. Grizzly bears can give birth to up to four cubs, although litters of two and three are most common.  The number of cubs that are born depends on how healthy and fat a mother is at the time she enters the den.

“Grizzly bears typically mate between May and early July.  Although grizzlies have a gestation period of only 6-8 weeks, birth doesn’t actually occur until 6 months later in dead of winter.  How is this possible?  Upon conception a fertilized egg begins to divide until it gets about the size of a pinhead and is called a blastocyst.  In some mammals like humans, the blastocyst implants into the uterine wall within a week of conception where it continues to grow until birth. Female bears however have evolved “delayed implantation” whereby the blastocyst does not implant into the uterine wall until late fall, just before a grizzly mother enters her den for the winter.  Within a week of conception (during the spring) the blastocyst enters a state of dormancy.  In late fall the blastocyst will implant into the grizzly mother’s uterus if she is fat and healthy enough to support cubs during the winter hibernation.  If she is under severe stress, and under nourished, the blastocyst will simply be reabsorbed into her body.  The number of cubs in her litter is also determined by how healthy and fat the mother is in the fall.  A really fat and healthy mother may give birth to up to four cubs, whereas a marginally fat mother may only give birth to one or two cubs.” Delayed implantation in grizzly bears from GrizzlyBay.org 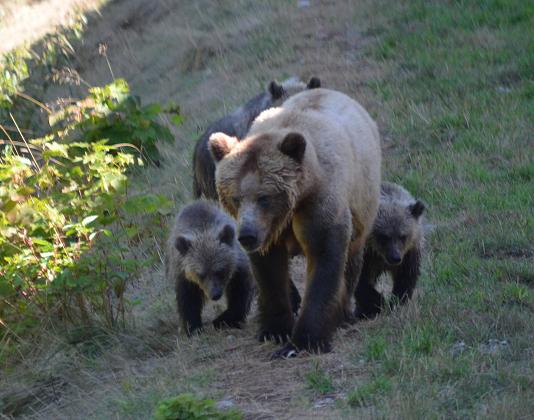 This mother grizzly bear and her three cubs were a common site on the Glendale River this fall. There is a finger of land that connects the two viewing stands used by the lodge and the bears also use this as they travel to various parts of the river to catch and eat the salmon. The view from the stands provide many opportunities for excellent photos.