One of the most often asked question whether a lone grizzly is a male or female? A male is usually bigger than the female and his head appears to be smaller in comparison to his body.  Females appear to have shorter legs and are a bit squatter in appearance. Luwen and Liwen from Singapore provide the photo showing the tried and true way to tell the males from the females, which is to watch them urinate. The males urinate forward, and the females backward! If you are lucky enough to see or photograph that, then you will know without a doubt whether the bear you are seeing is a male or female grizzly. 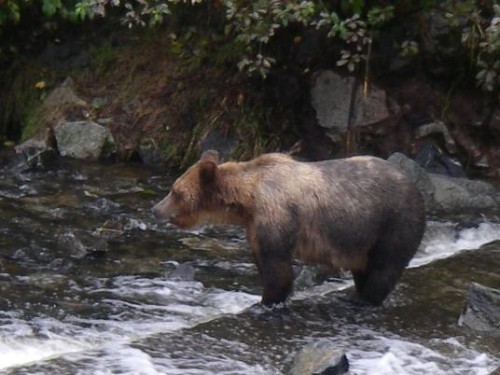 An adult grizzly bear on the river near our viewing platform waits patiently for the salmon to move up river within catching distance of her position. Patience is rewarded and she has a family to feed. However this is not always the case, tomorrow….