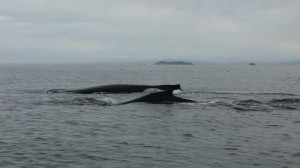 For the past five years the number of humpback whales spending their summers in our viewing area has increased to eight to ten whales viewed on a daily basis.  The southern BC/Washington population, which includes our area, is approximately 200-400 whales. It is becoming more common to see calves with their mothers. The gestation period is approximately 11 months, calves being born between December and April. A calf will spent about one year with its mother before becoming independent. Our viewing area is rich in herring and therefore a feeding area for the calves and mothers. There also appears to be a correlation between feeding and breeding grounds. The majority of humpback whales feeding in the southern BC waters have been re-sighted off mainland Mexico, as well as Hawaii according to the B.C. Cetacean Sighting Network.

Morning from the Dock 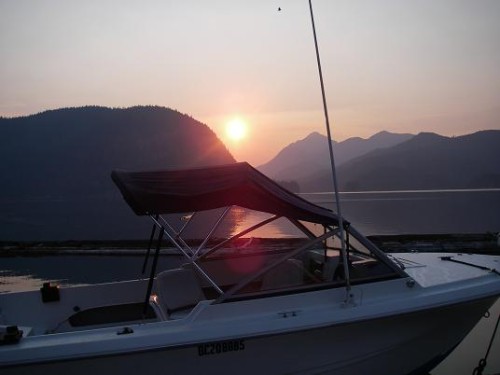 I always enjoy a sunrise from Grizzly Bear Lodge’s dock. As a guide I am up before 6:30 to make sure the coffee is ready when guests are called and my boat is loaded for the day. Loaded with the picnic lunch, ice in the drinks cooler and enough gas tanks for a full day on the water. Full day being away from the lodge by 7:30 or 8:00 depending on the time of the season and back around 4:00 with a bathroom stop somewhere in between.