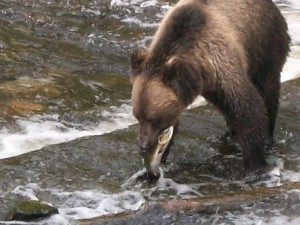 Male pink salmon develop a large hump on their back during spawning, hence the nickname humpback (humpie) salmon. They are the smallest of the fall spawning Pacific salmon. Pinks have a very regular life history, living for two years before returning to spawn the next generation. Pink fry do not rear in freshwater. Immediately after emerging they move downstream to the estuary and rear there for several months before heading out to the open ocean. Because of this, pink fry have no spots, which provide camouflage in streams, but are bright chrome for open water.

The only interest the grizzly has in the life cycle of the pink salmon is their sex. At certain times in their feed grizzly will drop a male humpie to catch a female which contain the high fat content roe (eggs).  During this peak of the run when grizzlies have access to an abundance of salmon at that time they will eat only the parts highest in calories – the eggs, skin and brains.

Black Bear On the Bluff

We always keep our eyes open for Black Bears cruising the beaches at low tide.  Sometimes it also pays to look up.  Black Bears are much sleeker then Grizzlies and have short claws, which makes them excellent climbers.  In the late summer there are often salal berries growing on the rocky outcroppings, which the bears enjoy. 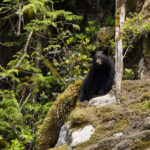