Alfred Bittner provides a great photo that I call “Follow the leader”. Take a close look and there is a tip of a dorsal fin just in front of this large male killer whale. Also an excellent photo as this is how an orca is identified using a picture of the right side of the orca showing its dorsal fin and the saddle patch. All the resident orcas on the BC coast are in two groups either the Northern or Southern Residents.
The website: http://wildwhales.org/killer-whale/ provides the following:
“The southern resident community consists of one clan (J clan) and 3 pods (J, K and L pods) and number only around 86 animals. They are most commonly seen in the waters around Victoria and the San Juan Islands in the summer, although they may range north to Desolation Sound and as far south as California in the winter months. Southern resident killer whales are critically endangered, due to their small population size, reliance on endangered or threatened salmon runs for prey, high toxin loads and sensitivity to boat disturbance.

Guests are often a little confused when they see a mother grizzly catch a salmon and not share with her young cubs.  She does this for two reasons.  Although the mother is nursing these cubs it is in everyone’s best interest for them to learn to catch their own fish and feed independently.  Secondly because the mother is nursing these cubs she needs to consume a lot of calories to maintain this and must be a little selfish at times. 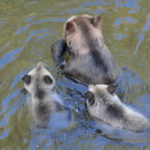