An often asked questions from the guests a Grizzly Bear Lodge is: Is that a male or female grizzly?  Some guidelines we use to go by are: The male is usually bigger and his head appears to be smaller in comparison to his body. Females appear to have shorter legs and are a bit more squat in appearance. The body difference is often hard to determine unless there are several grizzlies together. And of course in the spring when they have not had time to fatten on the salmon it may be even harder to determine the difference. In the May and June the mating season the male has a swagger, often walking with a swaying walk with their hind legs farther apart than normal. The tried and true way to tell the males from the females (as shown in this picture) is to watch them urinate. The males urinate forward, and the females backward! This picture also reinforces something I was told by a friend who spends allot of time in the bush “If you take a drink of water from a river or stream do not walk up river and look around he corner.” 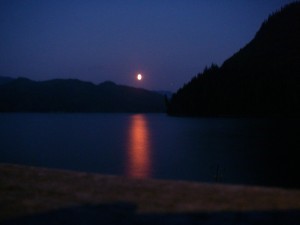 Photographers always find a subject for a picture in this case a moon rises rather than a sunrise. The scenery in this part of Canada’s British Columbia’s coast is often overwhelming for our guests. As a guide I am frequently asked to stop for pictures that I take for granted but I realize that this is all new experience for our guests and memories are captured on film.