A Wikipedia quote    “When spyhopping, the whale rises and holds position partially out of the water, often exposing its entire rostrum and head, and is visually akin to a human treading water. Spyhopping is controlled and slow, and can last for minutes at a time if the whale is sufficiently inquisitive about whatever (or whomever) it is viewing.
Generally, the whale does not appear to swim to maintain its “elevated” position while spyhopping, instead relying on exceptional buoyancy control and positioning with pectoral fins. Typically the whale’s eyes will be slightly above or below the surface of the water, enabling it to see whatever is nearby on the surface.
Spyhopping often occurs during a “mugging” situation, where the focus of a whale’s attention is on a boat rather than on other nearby whales. Spyhopping among orcas may be to view prey species. For this a spyhop may be more useful than a breach, because the view is held steady for a longer period of time.” And thanks to James and Wendy Kastelein for the great photo. 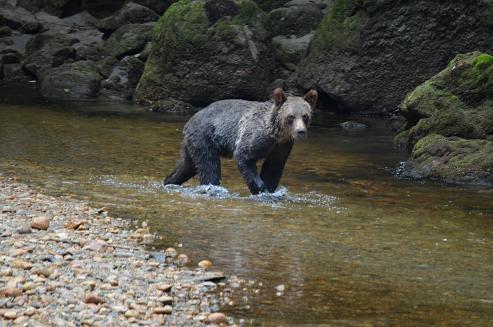 The first half of the viewing season from Grizzly Bear Lodge is spent in the Glendale River and it’s estuary. We travel up Knight Inlet in the morning for about an hour and fifteen minutes and tie to a float in the mouth of the river and transfer to a smaller 5.5 meter (yard) skiff to travel up the river. The river is a pathway for the bears as they are either coming to the estuary for the sedge grass and to turn over rock in search of other protein or returning to high ground as the tide rises. As the tide rises your guide is in the water slowly pulling the skiff up river were we meet bears either coming or going.