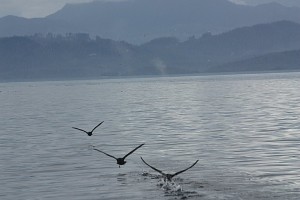 Large flocks of surf scoters while wildlife viewing are common in Knight Inlet as well as the area of Johnstone Strait where we spend our day’s whale watching.  The abundance of food for these ducks in the form of herring is shown in the difficulty that they have leaving the water. They appear to be running on the water while trying to build up enough speed to become air born but it is common to see the ducks abort a take off and go for the dive to get out of the way of approaching boats. Maybe this is why airlines are so careful when calculating their payload, as they would find an abort with a dive rather uncomfortable. 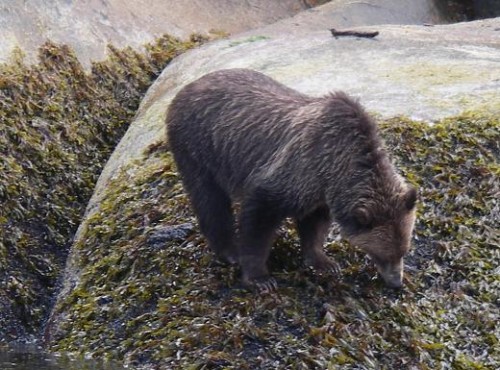 This is more common than one would think. It is not a result of the lack of other food it is more because seaweed is full of vitamins and minerals –vitamins: A, C, E, K and B and minerals: iodine, selenium, calcium and iron. Not sure how many grizzly bears have a degree in advanced nutrition but over the centuries they seem to have learned what is good for their system.