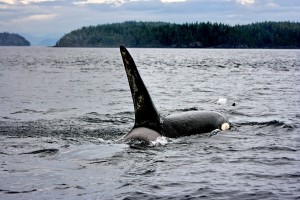 The day whale watching means we travel to the area of Johnstone Strait near Telegraph Cove on Vancouver Island BC.  The resident, salmon eating orca, arrive in early late June and stay through October while the transient, mammal eating orca are in the area all year.  Confused?  The first serious study of the orca populations in the mid-1970’s started as a summer study so when the scientist arrived in July and left in September the orca were always in the area and therefore there named resident orca.  Little did they know that this was a summer feeding area as the orca followed the salmon?  The transient orcas, which were in the area, spend more time in the remote inlets in the summer because there was more boat traffic.  The transient orca still travel through our viewing area in the summer but this photo is of a resident as determined by the size and shape of its dorsal fin, taller and narrower at the base. Photo provide by guest Alferd Bittner.

“When spyhopping, the whale rises and holds position partially out of the water, often exposing its entire rostrum and head, and is visually akin to a human treading water. Spyhopping is controlled and slow, and can last for minutes at a time if the whale is sufficiently inquisitive about whatever (or whomever) it is viewing.

Spyhopping often occurs during a “mugging” situation, where the focus of a whale’s attention is on a boat rather than on other nearby whales. Spyhopping among orcas may be to view prey species. For this a spyhop may be more useful than a breach, because the view is held steady for a longer period of time.” From Wikipedia