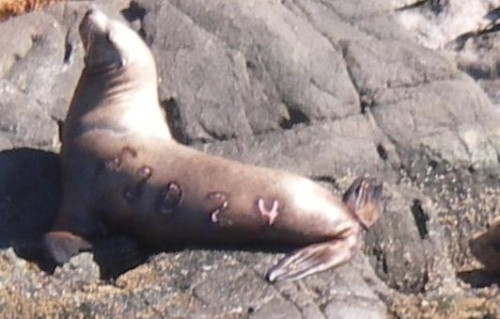 “The Steller Sea Lion Recovery Team recommended in 2000 that researchers begin branding and marking Steller sea lion pups throughout their range as a means to estimate vital population parameters in the future. Population parameters such as survival, age at first reproduction, and natality are important factors to understand population dynamics and gauge the health and stability of populations. Specific rookery sites were chosen to initiate these long term marking studies, both in the western and eastern stocks. For the eastern stock, three rookery sites were chosen in southeast Alaska (Forrester, Hazy and White Sisters) and 2 were chosen further south off southern Oregon and northern California (Rogue Reef and St. George Reef).” Patrick J. Gearin NOAA, AFSC, National marine Mammal Laboratory. Over the years we have seen sea lions with brands originating in both Alaska (Forrester) and California (Rouge Reef).

Time for a Grizzly Bear Tour 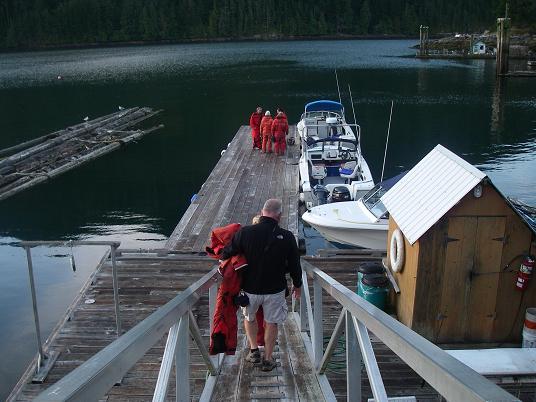 Mornings on the water can be a little cool so many guest wear the “floater suite” provided by Grizzly Bear Lodge. If you don’t wear them they must be in the boat as they are your lifejackets. If you are acclimatized to the West Coast the suits are not necessary as this guest demonstrates. On most days, by noon, the suits are in the front of the boat. Departure from the lodge is by 7:30 or 8:00     depending on the time of the year and this is after a 6:30 or 7:00 wake up call and a good breakfast. A picnic lunch is a must as we normally return between 3:30 and 4:30 depending on the tour. The only tight schedule is the fall trips to the grizzly bears when we use the viewing stands and we must be in the stands by 10:00 all other trips are flexible.