Two incredible photographs the first being a humpback whale lunging through a ball of herring directly toward the boat. A perfect photo showing the herring in the spray, the baleen along the lower jaw and the growth on the pectoral fins. The second shows a female orca coming out of the water on its back with a calf on its belly. A unique photo that I have never seen duplicated or heard of from another guide in the area. Comparing the two photos one would say the humpback is much clearer, more close-up and would win as a photo until you were told that the orca photo was taken twenty of more years ago on 35mm film. So no second chance or multiple digital shots just a once in a lifetime photo. 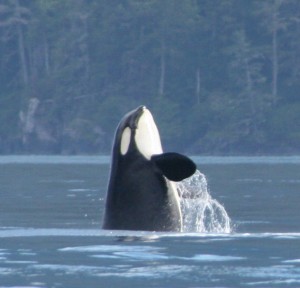