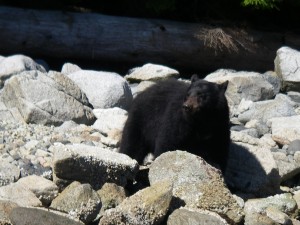 Your first evening at Grizzly Bear Lodge involves an evening boat run in the local waters looking for black bears.  At low tides the bears come to the beach to roll rocks for protein in the form of small crab, clams, barnacles, amphipods and other tiny invertebrates. Guest often ask how do the bears know when there will be a low tide?  When we travel along the shore by boat it is possible to pick up the smell of the beach and it is said that bears are thought to have the best sense of smell of any animal on earth. For example, the average dog’s sense of smell is 100 times better than humans. A bloodhound’s is 300 times better. A bear’s sense of smell is 7 times better than a bloodhound’s or 2,100 times better than a human. Simply stated they smell low tide and food. 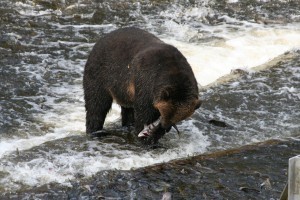 Fall on Knight Inlet’s many rivers is a time of plenty. The salmon start to arrive in mid-August and our lodge is permitted to proceed up the river to the viewing stands after August 25. On this wilflife tour day we have a good view of a “large” grizzly bear enjoying its catch. This bear does not move off the river as some of the small grizzly bears do rather it stays with the salmon. Why leave the good fishing and risk losing your spot on the river?