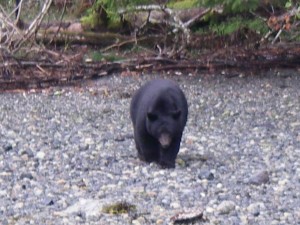 Not the sharpest picture but it was taken in mid September to show a black bear with enough fat to hibernate. This bear is big enough to challenge a sub-adult grizzly.  Several years ago there was a large black bear that did just that for the first part of the viewing season in the Glendale River estuary, the main area for observing grizzly. The first part of the season is mostly mothers with new and one year old cubs and some three and four year old grizzlies.  The black bear mentioned managed to claim its part of the beach until one of the breeding male grizzly appeared and that was the last we saw of the black bear. It is interesting to note that the bear in this picture does not have access to the salmon rivers because of the grizzlies so its bulk is from grass, beach protein and berries.  Once the berries appear in June they last through the fall.  There are a variety of berries including; huckleberry, salmonberry, blackberry, salal berry, thimbleberry, and elderberry all within a short walk from the lodge. 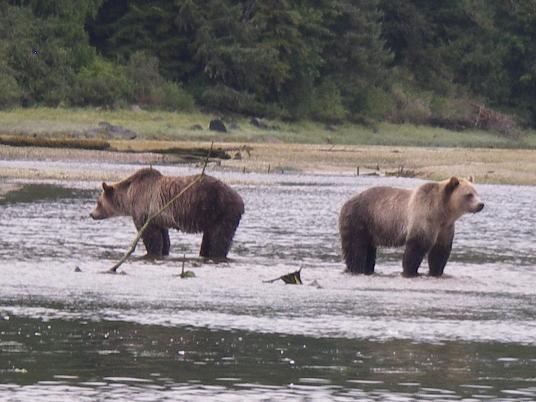 The grizzly bears of Knight Inlet’s Glendale River spend a great deal of time in the river estuary before the salmon arrive. In the spring and early summer they are feeding on sedge grass and turning over rocks along the shore to enhance their diet. When the first few salmon start to arrive in mid-August the bears are in the lower river that we are able to access with our flat bottom shallow draft skiff. These two grizzly bears seem to be on guard looking for the few salmon that are starting to enter the river. Back to back they have the full 360 degrees cover to make sure they spot any salmon trying to get up river.