Although this photo does not have a date to determine the time of the year it was taken late in the season likely September. Fall bears have a pretty good layer of fat and this means they float much higher in the water. The early season black bears often have only their head out of the water and very little of their back. As I mentioned in yesterdays post the lodge is in an area of many small islands and bears are good swimmers that travel between island.  It seems that they believe in the “grass in greener on another island” philosophy. This same philosophy has brought several grizzly bears to Minstrel Island where our lodge is located. As the population of grizzlies grow in the area of Knight Inlet it has become more common it see grizzlies on the evening black bear tours and while looking for whales and orca. 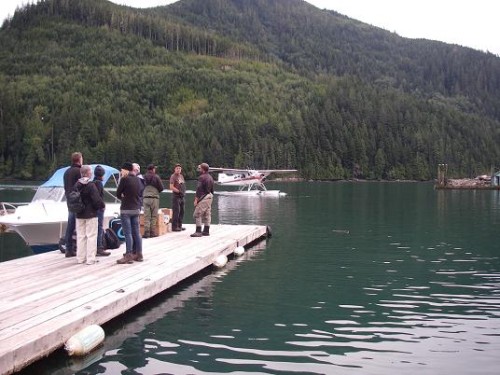 Few seaplanes seat eight guest comfortably so we normally have two planes bring guests into Grizzly Bear Lodge from Campbell River. This also provides us with room for the “always” necessary groceries. As you can see there are groceries from the first plane stacked near the end of the dock and luggage waiting with guests to be placed on the second plane that is nearing the dock. For many of the guests this is their first experience flying in a float plane and the reviews are mixed but I would say they are overwhelmingly positive.