If you Google “orca A72” and go into  “A30 matriline – Wikipedia, the free encyclopedia” you will learn about all about Bend (born 1999). Bend is a young female and has a distinctive cut at the middle of her dorsal fin, the cause of which is not known. Above photo.

The orca pod often viewed on our tours is the A30.  A30 matrilineal is the name given to the most commonly seen orca matriline in British Columbia. The matriline was present in over 60% of all of the encounters in the Johnstone Strait region, making it one of best known matrilines. The group’s size has increased, from 6 in the mid-1970s to 10 as of 2013, including 4 calves. It is most frequently seen in Johnstone Strait from late spring to early fall, often traveling with other pods of the Northern Resident Community. The second photo shows this pod minus the three adult males which were in the area but not traveling with the family. Note A72 is the fifth one in the photo.

Late Afternoon at the Lodge 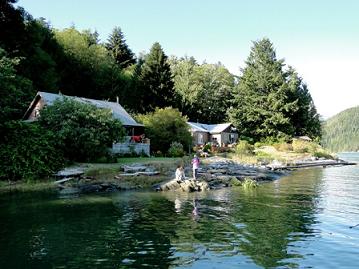 Most of the day trips from the Lodge return by 4:30, which leaves a couple of hours of down time before dinner. Guests congregate on the front deck, walk the beach, hike the trails behind the lodge or read in the sunshine. The other and for most the more important activity is to check their days photos. It is also the time guests exchange e-mails so they can trade pictures if they are not able to do that on their laptops.