As this photo taken, on a whale watching tour shows orca has a very distinctive coloring. While these markings are beautiful, they do have a very important purpose. The quote from “The Orca Ocean” website is a good explanation.
“The first thing the orca’s markings do is to help break up their shape in the water. This is known as Disruptive Coloring. Close up the orca is quite visible in the water. However, when the orca gets further away, the white spots help to make the orca look like a collection of smaller animals, thus fooling their prey. Another bit in fooling their prey the eye patch. Animals that are being attack will instinctively go for the eyes. Sharks protect their eyes from seals and sea lions with membranes that come up and cover the eye. Orcas, however, have the large eye patch that the prey will focus on and therefore leave the actual eye unharmed.
The other purposes the coloring on a killer whale is what is known as Counter Shading. Counter shading is a form of camouflage. What it does is simple: When an orca is swimming above their prey and the prey looks up the orca’s white patches will blend in with the light shinning down from the surface. Aforesaid, the black patches that remain fool the prey in to believing the orca is a collection of smaller animals. The counter shading also works when the orca is swimming below the prey. The animal will look down and see only hints of white and a black back that blends with the dark waters.” 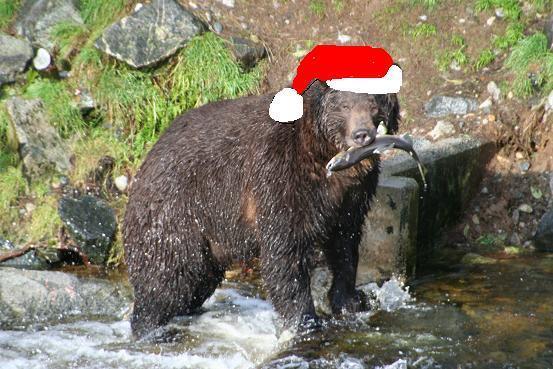 One of my favourite photos as it shows the power of a grizzly bear. “This is my Christmas present – thank you .”