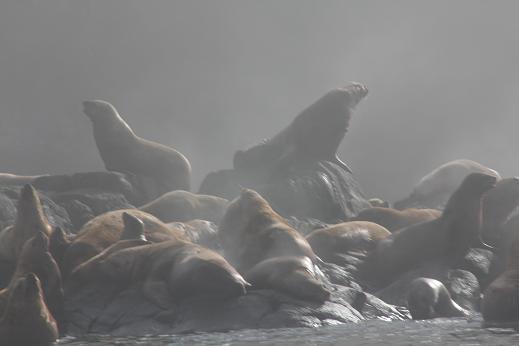 August whale watching can have some interesting mornings as the warm days will produce fog for the following morning. The fog may be patchy and is gone by noon but it does not prevent us from leaving the dock as we have radar and GPS. The fog does produce some unique photos such as this one with stellar sea lions on the rocks near Vancouver Island’s Telegraph Cove. The sea lions are now in the area most of the summer whereas in past years they were only passing through in June and September on their migration between California and Alaska. 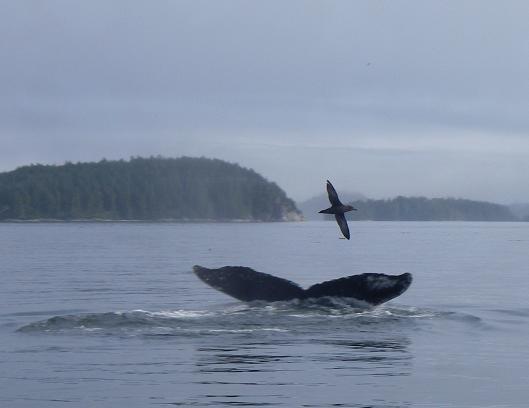 Always trying for an interesting photo while on a wildlife tour and this time it worked. The whale’s tail gets the attention but I wanted to focus on the sooty shearwater. The heading of an article I found reads “Longest Animal Migration Measured, Bird Flies 40,000 Miles a Year”. Sooty shearwaters migrate nearly 40,000 miles (64,000 kilometers) a year, flying from New Zealand to the North Pacific Ocean every summer in search of food. The birds leave New Zealand in the Southern Hemisphere’s winter—summer in the Northern Hemisphere—and take advantage of prevailing winds along different portions of their migration route. Our area is a resting point and feeding area as they return home in September.”