Steller sea lions use land habitat as haul-out sites for periods of rest, molting, and as rookeries for mating and pupping during the breeding season. In this case it is a resting area as they migrate along the coast spending part of their spring and fall in the area where we watch whales. Steller sea lions have been known to migrate large distances (>400 nm) but it is presumed their routes remain coastal. They are solitary hunters but are often seen small groups, but may gather in large “rafts” at the surface near rookeries and haul outs. The haul-pouts are a noisy area as they are capable of powerful vocalizations that are accompanied by a vertical head bobbing motion by males. 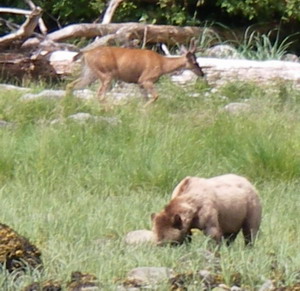 At one point in time they were not much more than ten meters (yards) apart. The beach seemed to have pretty good footing for the deer so they were not worried about a sudden lunge from the bear. I am sure the grizzly had determined that the chance of catching one of the deer was not worth the waste of energy required.