Guests in the lodge often ask about wolves.  The wolves located along the coast are referred to as Rainforest Wolves that take to the sea, swimming among forested islands to feed themselves. These wolves make more than 75% of their living from marine resources like salmon, beached whales and seals. The most common question is how often do you see wolves and the answer is rarely, I have guided for Grizzly Bear Lodge nine seasons full time and also spent several weeks every summer in Knight Inlet for more than twenty-five years and had seen wolves twice until this year. This year I had two good views of wolves and Angus and Ed three more.  This picture taken by Angus was at the mouth of the Glendale River on a grizzly bear tour where along with the guests the wolf was watched for more than fifteen minutes. Truly a rare sight. 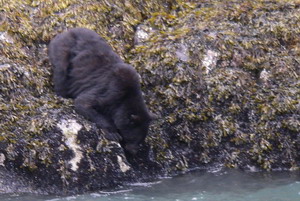 Wildlife viewing is where you find it and many of the black bears we find are on whale watching trips. This black bear has done a good job of putting on weight over the summer. He is in good shape for the coming winter. This one was not going swimming rather was concentrating on getting more muscles and barnacles from the rocks before the tide rose.