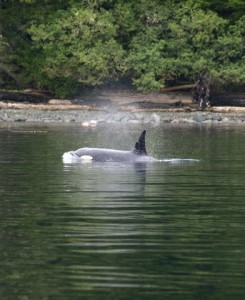 Tim O’Neil does it again, an excellent photo of A72.  Resident and transient orca along the coast of British Columbia have photo identification catalogues that make use their unique dorsal fin and saddle patch to identified each orca. Some ID’s are easy and this is one of the easy ones.  The notch in the front of this female’s fin identifies her, as A72 she was born in 1999 daughter of A50 born is 1964. A50 is daughter of the pod’s matriarch A30 born in 1947. The Orcas live in a matriarchal community. The females live much longer than the males, and therefor have more valuable experiences, which make them the dominant.  The males stay with their mother all their life and breed outside their pod. The pods are named after the dominant female in this case A30 and they are members of the northern resident orcas which spend the summer in the waters north of Campbell River close to Telegraph Cove in the Johnstone Strait. 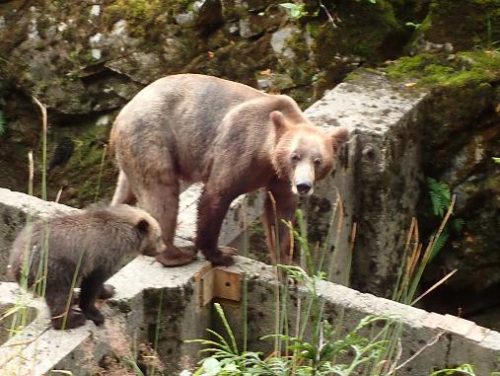 As this photo shows this mother grizzly was aware of our presence but it’s “comfort zone” was intact as it went about looking for a meal. We spent about fifteen minutes with this grizzly and the experience the guests had was memorable.