This was a normal “foggy” morning in August when we first found this pod of orca in Johnstone strait. The posting on February 17 will show the same orca in the sunshine later in the day. If you remember from my previous posting these photos were taken with a small waterproof Pentax (an optio, 6.0 megapixels with three times optical zoom) point and shoot so these orca came quite close. The first photo was when they appeared out of the fog and we shut off the motor and waited while they approached the boat. Again the guest photos are much better than mine are as I was also using the hydrophone to listen to their calls. If you check the December 26, 2013 posting you will see how close the orca came to the boat while they were listening to our hydrophone.

In the spring time before the berries begin to ripen and the salmon start to trickle in the bears feed on sedge grass and the available seafood at low tide.  The intertidal areas of our rocky coastal beaches are rich in life.  “Rock Rolling” is a favourite activity of both coastal Black and Grizzly Bears.  Under these rocks there are often shore crab hiding which are a favourite of the bears. 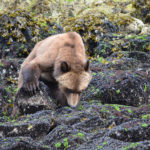