Many mornings in August and September start with a low layer of fog over the area surrounding Grizzly Bear Lodge. This fog is short lived as it normally burns off by noon.  The boat used for whale watching is equipped with radar and all the guides have a personal GPS with routes programmed to allow them to navigate in the fog. Whale watching is not a “solo” experience as we are in radio contact with two or three others “whale watchers” and share our search. Unlike Victoria on the southern tip of Vancouver Island a busy day in our area may involve eight boats watching whales in a rather large area while Victoria may have fifty boats in a similar sized area. This photo is of a male resident orca that passed beneath the boat as surfaced in the fog.

Our crew has been with us for an average of over 10 years.  We have witnessed a huge increase in interest in wildlife viewing over the past years and have been fortunate to see some amazing success stories, with increased numbers of Grizzly Bears and Humpback Whales in our area.  I’m on the left pulling the boat in at the lodge, and my brother cam is on the right at telegraph cove, stretching the legs after a morning of whale watching. 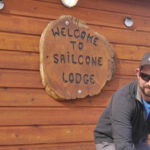 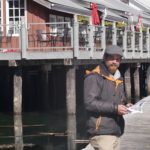