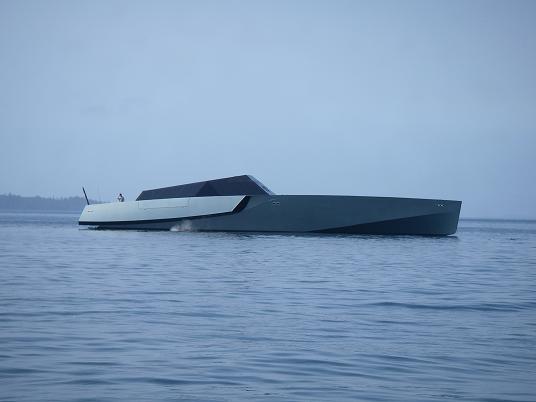 Not all watching is wildlife watching.  This summer we were taken by surprise when this vessel showed up in our viewing area.  The guest I had on board became quite interested and took many photos.

“PORT ANGELES — Galeocerdo — which is the genus name of the tiger shark — came into the Port Angeles Boat Haven for a load of fuel on Friday afternoon.

The unique-looking vessel conjures images of the Batmobile or something out of “Star Wars.”

The 118-foot vessel was built of composite materials by Wally Yachts in Italy in 2003.

She is powered by three gas turbine Detroit Diesel engines that generate 16,800 horsepower, which will push the boat up to 60 knots (70 mph).

She also has two auxiliary Cummins diesel engines, each of which delivers 370 horsepower and are used for close-quarter maneuvering and cruising at the more comfortable speed of 9 knots.

I understand that Galeocerdo was most recently in Mexico’s Baja California state cruising in the Sea of Cortez and is on her way north to spend the balance of the summer season cruising in British Columbia. But you can read more about this unusual vessel — with photos of its layout inside — at http://www.superyachttimes.com/sale/details/327.” Taken from the Peninsula Daily News

Not all encounters between grizzly bears are friendly but this one between siblings was playing. The wildlife tours from the lodge travel up Knight Inlet to view the grizzly bears along the shore in the spring and after August 24th we move up the river to the viewing platforms which overlook a man-made salmon spawning channel. Both along the beach and on the river we encounter juvenile bears testing their strength in play. The only true aggression is when a mother with cubs encounters a male bear or when one bear is defending its claim to a fishing area. But even these rarely end in injury as mothers are a “force of nature” normally left alone and the abundance of salmon in the area make the fishing spot not that important.