We were off Cracroft Point this summer on a whale watching safari and spotted a humpback whale rolling on it’s back with pectoral fins in the air and as we moved closer saw a number of pacific white sided dolphins having some fun with the whale. Hard to move the boat closer with a camera in my hand so I put it down but missed a picture showing a few dall’s porpoise mixed in with the dolphins. This dall’s and dolphin mixture is even rarer than them playing with humpbacks which happens several times a summer. 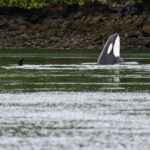