These small chunky cetaceans have black and white markings that give them the appearance of a mini Killer Whale / Orca. There have been reports by people mistaking Dall’s porpoises for baby Orca, but the lack of white eye patches and a much smaller dorsal fin is definitely a Dall’s. 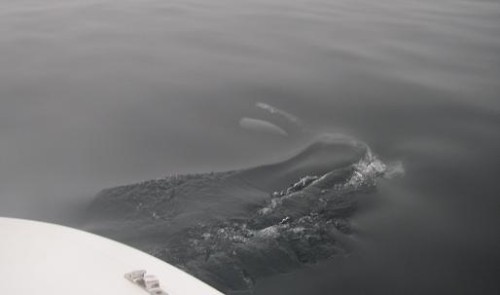 Dall’s Porpoise travel in small groups of two to eight animals rarely in larger groups of around twenty-five. They zip about quickly in random back and forth patterns looking for food. As they speed through the water, they throw a rooster tail type of splash. This is quite distinctive as they shoot along just below the surface of the ocean. They are known to travel at around 30 knots (56 kph or 35 mph). With all this speed it can be a challenge getting good photos. For this reason we often stop and they will make passes by the boat and sometimes we get lucky. They are very playful and are at times known to harass humpback whales see tomorrows post…..

The size of these second year cubs can be compared to the April 8th and 10th posting, which show first year cubs. Grizzly bear cubs generally stay with their mother for two years, although they will stay for three or four if the sow does not become pregnant in the fall of their second year. Pregnancy triggers a reaction in the sow through which she drives the cubs off and hibernates on her own in preparation for giving birth to new cubs the following spring. Cubs will often spend their first hibernation together, and three-year olds observed in frequent close proximity in the spring are most likely to be siblings who have denned together. Even second year cubs stay close to their mother especially when they are on a fishing river in the presence of other bears.