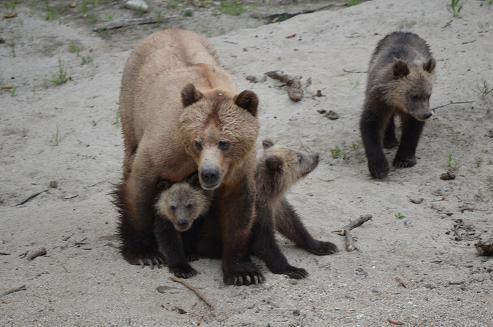 We watched this grizzly bear with her triplets most of the summer and she always had the same problem: two obedient cubs and one less obedient. The one cub and also the larger of the three was always lagging behind on the shore and along the river. When other grizzly bears approached it was always the last to respond to it’s mothers warnings but it did survive the summer and we hope to see it next year. Of the three it probably has the best chance because it was fatter. 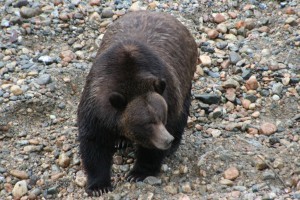 The lodge’s grizzly bear watching area in Knight Inlet contains a few large grizzlies. Nick-named the “boss bears” as they go were and when the want. Although it is nice to see the larger grizzly it is not always the best thing for long-term viewing. If a large bear is in the area of the lodge viewing stands it is often the only grizzly bear you may see. The best is to have them make and appearance then move off to the surrounding forest.