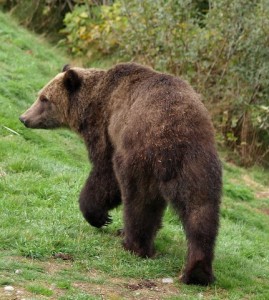 Is photo by Tim O’Neil of a brown bear or a grizzly bear? It’s either or both, because these are common names that have no scientific basis. Grizzly bears received their name because their brown fur can be tipped with white. This gives them a “grizzled” look, especially when blacklit by the sun. All the bears in North America are the same subspecies except one subspecies that occurs in the Kodiak Island.  The bears in BC’s rainforest are known as grizzly bears.  The Knight Inlet grizzly’s colour ranges from a very light brown which is almost yellow in some bears and almost white in others to a dark brown which may appear black. 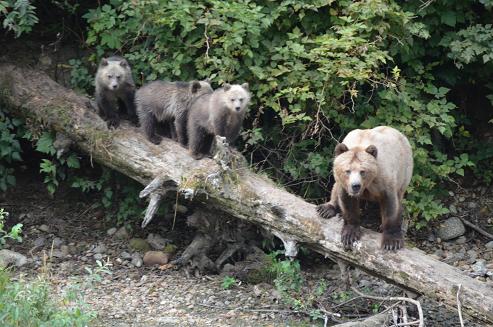 The waiting paid off with a bonus – three first year cubs. As in all wildlife viewing patience is necessary.  Wildlife does not have a schedule they may have a routine but the time varies from day to day depending on the height of the tide or other bears in the area. As guest often say this is wildlife viewing not a zoo.