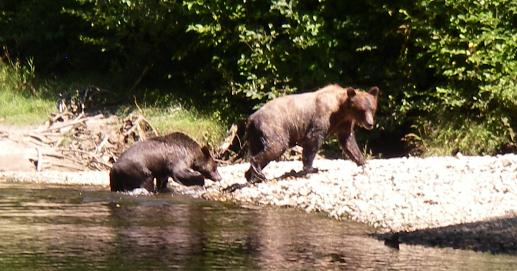 Grizzly bear tours from the Lodge, prior to August 25th, are in Knight Inlet’s Glendale River estuary and the river as the tide rises. After an hour and fifteen-minute boat ride from the lodge to the river we transfer to a 5.5 meter (yard) skiff which is used for the day’s grizzly watching. At low tide we move along the shore and observe the bears turning over rocks looking for protein and grazing on sedge grass. As the tide rises we move up the river by “one man power” (your guide is in the water pulling the skiff) which is the quietest way to move. The bears along the river in the early season are also grazing on sedge grass or eating berries and later catching salmon. As we moved up river we first encounter these two sub-adult grizzly bears moving down river. They seemed very alert and wary of our presence, which is unusual, as they tend to accept us on the river. As they moved off it became obvious that we were not the concern rather it was the mother grizzly and cubs that were also coming down river. Most grizzlies do not want to encounter mothers with cubs even if there are two.

One for the Road 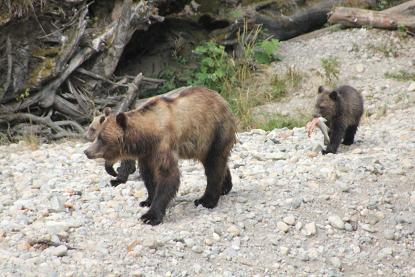 We had been watching this mother catch, eat and share salmon with her cubs for about forty-five minutes. As this mother decided it was time to move on the one cub did not want to but a few growls and it grabbed the salmon it did not want to leave and started to follow. As first year cubs they do not stray to far from their mother even for food.