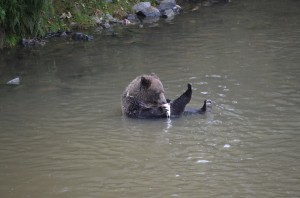 The grizzly bear tours from Grizzly Bear Lodge spend two hours on the viewing stands in the Glendale River after the 24th of August.  While on the stands we are able to observe the grizzly bears feeding on both sides of the stands, the natural river and the holding pond, which is the entrance to the spawning, channel.  The holding area is a little deeper than the river and bears have developed their own technique for eating the salmon they catch. Some grizzlies take the salmon to shore and hold it against a rock to strip off the desired parts.  This bear has developed it’s own style which is it sit (“like in a bathtub”) and hold the salmon against its leg. Why? See tomorrow’s post. 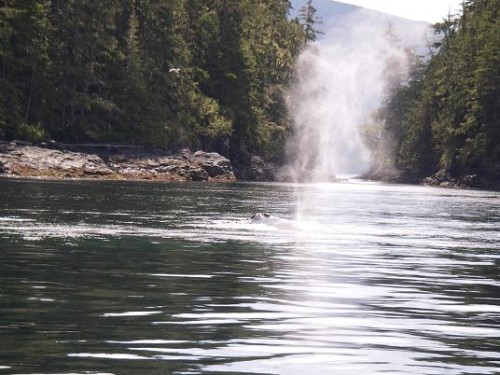 Believe it or not this little cove in often the object of photography and it is just made better when a humpback whales makes it’s presence known. Pictures from Grizzly Bear Lodge’s day trips are not all about wildlife some are just the beauty of the day.