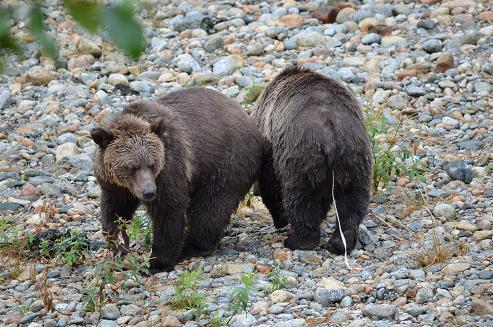 Not necessarily the most pleasant site but it is a fact of wildlife viewing involving grizzly bears. Two or three time a year grizzlies will appear with tapeworms.  Toward the end of summer and into fall, bears sometimes shed a type of tapeworm, commonly called the broad fish tapeworm. As this photo shows it can sometimes be seen trailing behind them. Grizzly bears can become infected by the tapeworm from eating raw salmon. The physical effect of bears harbouring tapeworm parasites is insignificant to the bear’s health. This will slightly stress the bear, but generally it is not advantageous for the parasite to kill the host, since that would also result in the death of the parasite.

The bears in the first photo are the ones I mentioned in yesterday’s post. After we moved to the deck the mother grizzly and three two year old cubs came up the bank from the river to just below the deck of the cabin. This photo is one I took from my small camera before they came closer and it was necessary to be more concerned with the bears than getting better pictures. But I can assure you the guest obtained good photos. Once these bears moved down the river to the fishing area and we waited until they settled in to fish we then moved down the river nearer the fish ladder and more photos were taken. All in all an excellent day on the river.